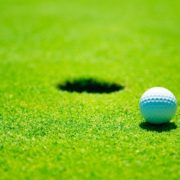 GRIP DOWN FOR LASER-LIKE SHORT IRONS

Tip Of The Week

If you watch the pros closely, you’ll rarely see them make a full, all-out swing with their wedges or short irons. They usually dial it down to 75 or 80 percent of their full tempo. Why? Because when they’re within striking distance of the pin, distance control is all that matters. And the best way to control your distance is to swing within yourself.

One way to do this is by choking down on the club, gripping halfway down the handle to subtract 5 yards from your approach, or all the way down to the steel to remove 10 yards. This will allow you take the longer club and swing more smoothly and in control, rather than having to go all-out with a shorter club. So if your normal 8-iron carries 150 yards and you need the ball to travel 145 yards, grip halfway down the handle; if you need it to go 140 yards, move your hands to the bottom of the grip. Try this grip switch with all of your scoring clubs and you should start to see a lot more birdie opportunities. 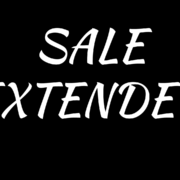 You asked, and we made it happen!
We have extended our online Black Friday / Cyber Monday Sale for the whole week. TAKE ADVANTAGE NOW!!! 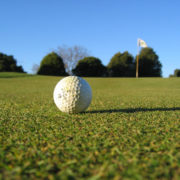 $385 gets you unlimited walking rounds.

$995.00 gets you unlimited golf with a cart, no restrictions.

(No guest passes or range use included)

$1,595 gets you unlimited golf with a cart, no restrictions.

All memberships include 10% off non-sale merchandise. 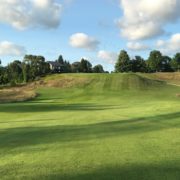 Host your next outing at Sugar Loaf!

We appreciate your business, come play the best greens in the county.

Let us tailor a package for your next outing or group event.

Twenty one teams took part in our annual Memorial Day 2 person scramble on a day where temperatures reach into the mid 80’s.

In the Open Division, the team of Dustin Popa and Gabriel Schaefer took home first prize with a score of 64.  Second Place was the team of Todd Kelly and Larry Clark with a 66, and third place was rounded out with the team of Rich Dubs and Paul Bardenhagen with a 67.

The Handicap Division was by far the most contested with the team of Joey Barrientoz and Cody Brown shooting a net 59, winning four tickets to see “Yes” at Interlochen.  Second place was take by Dave Anderson and Calvin Korson with a net 61.  They were awarded four gift certificates for the Little Traverse Inn.  Following up in third place was the team of Roger Thomas and Mike Peplinski.  They took home four gift certificates to the Sugarfoots Saloon.

The Mixed Division had some familiar faces atop the leaderboard with the team of Peg and John Larson taking first place with a score of net 65, they were treated to rounds of golf at Tree Tops!  Second place went to the team of Gary Pulsipher and Sue Egelus.  They have rounds at the Leland Country Club for their score of 69.  Third place was the team of Dale and Lynn Watkowski with a score of net 70, and they will be enjoying their rounds at the Old Course.

Thank you to everyone who participated in this years event.  Looking forward to everyone returning for our Labor Day 2 person scramble. 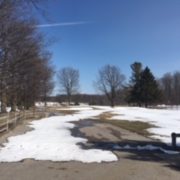 I hope everyone enjoyed the Masters this past weekend.  Patrick Reed displayed some great putting over the four days at Augusta.  Congratulations to him on his first Major victory.  Unless you traveled South, that is about as close to golf that us here in Northern Michigan can get.  Frustrating to say the least, but it does look like we will see some snow melt this week combined with a rain/mix going into the weekend.

Our golf maintenance equipment returned today from winter repair.  We can’t wait to get the first cut in on the greens.  That will take place as soon as they are clear and can handle the traffic.  Our new fleet of golf carts will be delivered next Tuesday, straight from Augusta, maybe they will bring the warmer weather along with them.

Once we are able to get out onto the course again we will give an update on a possible opening date.  We are not giving up on April as of yet, although any more significant snow accumulations will certainly diminish those chances.  Think WARM!

Mother/Father nature has not been kind to us this Spring. Just when we thought we would be looking at an early April opening, we received a few inches of the white stuff. As of today (April 2) with snow still on the ground and another Winter storm watch in effect from Tuesday 8am until Wednesday 8am. We just can’t catch a break!

We will continue to keep you informed of an opening date as soon as we see the weather cooperate. Keep Thinking Spring!

Membership pricing will go up again as of April l5th, if you still want to get a price break. In addition, check out our new Sugar Loaf Value Plus Membership, it is a great deal to receive 20% off your golf with cart all season long. Available now in our online store.

Don’t forget it’s Masters Week! Who are you putting your money on this year?
http://www.masters.com/en_US/index.html

If you are here, you love the NEW Titleist Pro V1 & Pro V1x, or you are curious.  These balls are serious.  The talent you bring to the table is irrelevant.

The NEW Pro V1 & Pro V1x balls perform, for you, for your buddy with a 30 handicap, and for even for the “pro” that everyone knows.  These are the best balls in the business at this point.  If there was a better ball at a better value, this is where we would offer it.

Rest assured, we are here to make your life easier, and make prelim choices for you.